Garden to Cup Organics takes top honors in 11 of the 16 categories at this year’s North American Tea Championship. This includes six first place awards, the highest number awarded to a single participating company.

The North American Tea Championship is the premier competition for specialty loose leaf teas. It is the only independent competition, judged by professional tea specialists, to distinguish the utmost quality and best tasting teas commercially available in the North American marketplace.

“We are very honored to have the NATC present us with the most awards in the competition, including the highest number of first place honors,” said Raj Teja, President, Garden to Cup Organics. “Our VP of Development, Greg Lui, and his team work very hard to source and blend the highest quality organic teas in North America.”

“This is a very exciting time to be in the tea business,” says Greg Lui, VP Product Development for GCO. “In its 4,000 year evolution, tea has never been more popular. Innovative companies from across the world are brewing new life into this ancient drink and GCO is very proud to be a contributor of high caliber, quality innovation to the industry.” 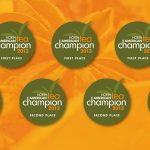